What is Laser Wart Removal?

Most of us have had a wart on a part of our body at some time in our lives. Warts are one of the most common infections caused by a microscopic virus that infects the skin.Most warts are harmless and can disappear on their own without a warts removal treatment. However, warts on parts of the body that are bumped or touched frequently can be painful and cause bleeding. Warts can also be embarrassing if they occur on the face or appear in noticeable clusters on the hands and feet.


Warts removal is a safe, effective and relatively painless procedure that can be used on even the most sensitive body parts. Laser warts removal can also be used to prevent warts from reoccurring.


Laser warts removal involves targeting the wart with a laser; the laser passes through the upper layer of the skin called the epidermis and targets the tiny blood vessels that feed the wart near the dermis, the middle layer of skin. Laser warts removal kills the blood vessels feeding the wart, effectively starving it until it dries up and falls off. The laser kills only the wart infected area and leaves the surrounding tissue unharmed and undamaged. 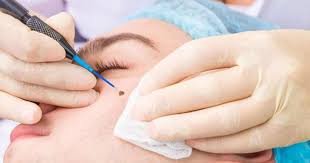