Moles, also called as Nevi. Medically, are clumps of pigmented cells that appear as black or brown spots on the skin. They materialize when cells, called Melanocytes which are responsible for the skin’s natural color, do not spread evenly but grow in clumps on the skin. Moles are thus darker than the natural color, and on further exposure to sunlight or during pregnancy, may darken more. Moles are also prone to hair growth on them.

Lighter skinned people tend to be more susceptible to it than those with darker skin, and can have an average of 10 to 40 moles spread on their body.

Our clinic provides mole removal treatment in Bangalore. To check if a mole is malignant, a sample of the tissue is taken. If the result is positive, an excision of the entire mole and its surrounding tissues is performed. A similar procedure is carried out for cosmetic purposes of mole removal, which is generally pain-free and common.


There are two prescribed methods for mole removal depending upon the type.

One method called the “Shave Excision”, which is mostly used for smaller moles, is where the space around the mole is numbed, cut around and beneath, and is thus removed by using a small blade. This procedure does not involve any stitches.

The other method called the “Excision Surgery”, which is mostly used to eliminate prospective malignant moles, is where the mole and space around it, is cut and removed, using a scalpel. This procedure necessitates stitches to seal the skin back.

Removing a mole using a laser involves numbing the area using local anesthesia. Afterwards, a laser is used to excise the pigmentation in the mole. The pigment is then cleared away by the body’s natural healing processes. A scab forms over the mole which eventually falls away.

The area may turn darker for a few days after the procedure. However, this can be covered up by cosmetics. Patients should avoid exposing the area to sunlight for at least six weeks and use sunscreen when they are outside.

The procedure is generally safe and the risk of scarring is minimal (about 1 percent). Whether or not it is painful depends a lot on the patient’s pain threshold. Some people report feeling a slight tingling during the procedure that feels like someone is snapping a rubber band against their skin. 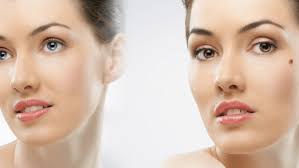