This disease is due to abnormal Skin pigmentation. In the lower layers of epidermis of our Skin, special cells called melanocytes cells form melanin pigment. The color of skin depends upon the quantity of melanin pigment produced by melanocytes. Larger the quantity of melanin pigment darker is the skin. In the diseased condition some or all of melanocytes get damaged or become non functional. Due to lack of melanin pigment, skin becomes white in affected parts. These affected parts have white spots in form of irregular patches of different sizes. White patches in skin may be symmetrical. Vitiligo also known as leucoderma or white skin disease may appear on any parts of human body and are not restricted to any particular organ. The vitiligo treatment is divided in 2 parts – 1st part to stop the disease from spreading with help of laser, PUVA and medicines & then treating the patches with melanocyte transfer or skin grafting commonly known as Vitiligo surgery.

Also Melanin is very important pigment in skin as it protects skin from harmful rays coming out from sun which have potential to cause skin burns and skin cancer. Vitiligo is not a communicable disease. White patches generally grow in size by the time.

This disease is found to be related with many other diseases such as alopecia, diabetes, typhoid, pernicious anemia etc. in some cases. The most disturbing and embarrassing consequences of vitiligo are lack of self confidence, inferiority complex, and many other social and psychological problems.

Vitiligo is found in almost all races in equal proportion irrespective of age and gender. 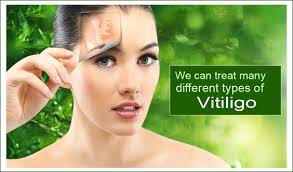